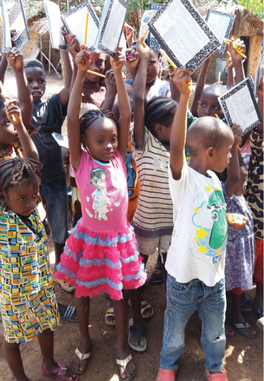 Sehwein is a village in remote Grand Gedeh County, eastern part of Liberia that shares its boarders with Ivory Coast in the West. Sehwein currently hosts over 200 Ivorian refugees. The village farm cooperative was formed in January, 2018. Participants include fifteen Ivorian refugee families and fifteen Liberian families. To teach teamwork, planning, and self-government, BRAID Africa facilitated a discussion among the cooperative’s leaders to determine the next step in their community’s development. The people expressed an overwhelming desire for their children to be able to attend school in the village.

Access to Liberia’s education system is difficult for people living in remote villages. Parents must send their children to distant cities to attend school at all grade levels. Though parents are eager for their children to be educated, it is common for them to delay the process in order to not part with their children at a young age. The long separation from family and financial obstacles prevent many children from completing their schooling.

BRAID Africa recognized that a village school would bring tremendous hope and opportunity not only to the children, but to the entire community. With our guidance and  financial support, the Sehwein Village Cooperative started an elementary school in an abandoned building. BRAID Africa worked with village chiefs to organize the co-op’s shared fund– from sales of co-op farm crops– to pay teachers’ salaries and to hire a principal.

The opening of Sehwein School energized the village community. Three dinner ladies stepped up to prepare and serve free meals daily to the students. They anticipated an attendance of fifty children. But neighboring villages heard about the school program and began to send their children. Two weeks after Sehwein School opened, there were 150 children in attendance with a waiting list of 50 more. Today, Sehwein school has three hundred thirty-four students. However, Sehwein community as in many rural communities in Liberia is now facing numerous challenges such as lack of teachers, lack of equipment, lack of drinking water, lack of electricity, lack of sporting and recreational facilities.

To us in BRAID Africa, starting a school is a step in the direction as this will serve as a spring board towards the achievement of some other Sustainable Development Goals within the community at large. We are challenged to improve on the existing situation on ground and will be delighted to be supported in our efforts.